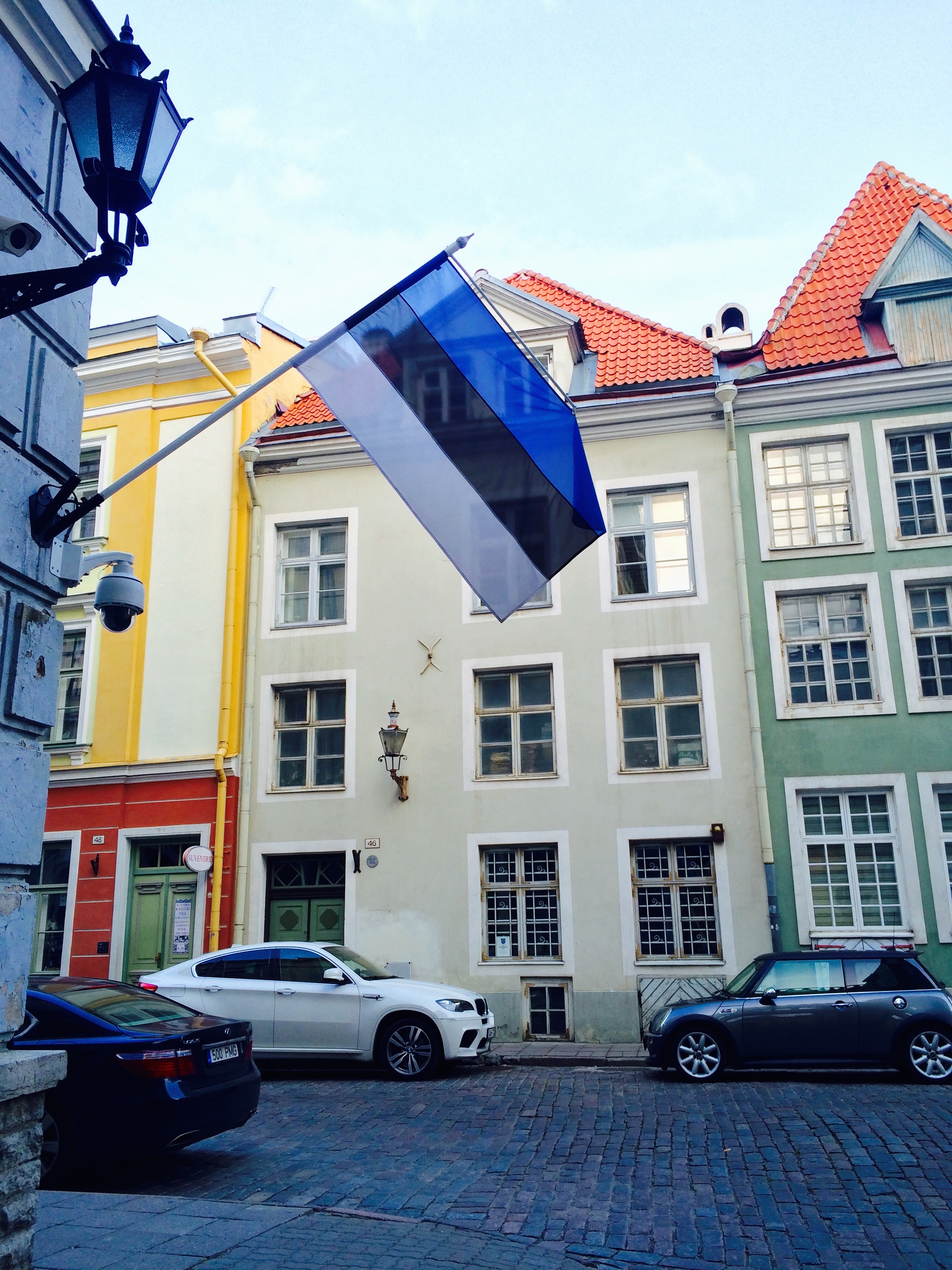 So you are planning to visit Tallinn for one day or maybe even two and I should say i’s an awesome destination in Europe as a city break. Tallinn is an unusual capital of Estonia with a cultural scene of magical medieval times, low prices and friendly locals. The charming small city, with the population of 440.000 people, offers everything for a perfect weekend break: delicious traditional dishes, historical settings and the comfort of a modern world. The pearl in the north of Europe is famous for Finnish people, it’s cheap booze and mysterious for the rest of the world.

If you spend your holidays in Tallinn you will find out that it’s not only an amazing combination of ancient and contemporary times. The city possesses different aspects to be proud of, for example it’s the oldest capital city of Northern Europe. It used to carry the name Revel, but after Estonia became independent in 1918 the new name Tallinn was established.

The official language in Tallinn is Estonian, nevertheless the majority also speaks Russian, because Russian citizens are the largest minority group of the Estonian population. The fascinating country joined the European Union in 2004 and adopted the Euro, which is a great news for travelers, but not the best aspect from an economical point of view. But we will leave politics to politicians and start our two days itinerary to the Baltic pearl!

Day 1. What to See in Tallinn in One Day

The top things to see in Tallinn: Old Town

Tallinn is a small and compact city, it takes only 15 minutes to get to the city center from the airport. The taxis are very cheap, 15-20 minutes drive costs only 5€. Moreover on your ride to the main attractions you can observe the picturesque view from the seaside road. Tallinn’s coastline lies on the Baltic sea and the Gulf of Finland, so you can spoil your lungs with fresh air and your body with a surfboard on the waves. The position of the country automatically influences the weather. Tourists prefer to visit the city during April or May, when the sun starts to show it’s chocolate sides. We’ve been there in September and we could enjoy excellent weather, sunny and refreshing at the same time!

When you enter the historical cobblestone path of Tallinn’s Old Town, be prepared to immerse into a fairytale. Medieval architecture, an overwhelming fortress, impressive ancient cathedrals, cute little souvenir shops and appealing eateries that will leave you speechless. The Old Town has a perfect size, so you don’t need a map to explore the surroundings and furthermore one day is totally enough to discover all the marvelous sights of UNESCO’s World Heritage, Old Town. It’s also split into two parts: the lower town, All linn, and the upper town, Toompea.

While exploring the Old Town , you won’t wanna miss the little charming square in the pulsing heart of Lower Town. Since the 13th century the square gathered people for diverse attractions like medieval festivals and magical markets. It’s surrounded by various restaurants and one of the must visit places is III Draakon, old-fashioned tavern tucked into the corner of Town Hall. It feels like a time-machine brought you into Estonian’s golden age: detailed decor and ambience, authentic medieval atmosphere and cuisine. The rigorous waitress in a time accurate dress will serve you with delightful pies, delicious deer-soup and real Estonian beer. Don’t forget to taste the brine pickles in the barrel, it’s free! You won’t expect it, but the prices vary between 1-3€.

Next to the Raekoja Plats you can find the oldest pharmacy in Europe. Make sure to explore the indoors of the Town Hall pharmacy, because it doesn’t sell only modern pharmaceuticals, but also mementos of times past. There is also a museum where you can find the most famous of herbs and their history.

In the one of the prettiest half-hidden little walkways of the Old Town, you can discover what’s left of St. Catherine’s Church and various ancient tombstones. During the late Middle Ages it used to be the largest ecclesiastical building in Tallinn, but in 1524, during the Reformation, the monastery was destroyed. Now only fragments remain of the original parts. You will be surprised what you can find inside: a black unspectacular screen, but if you look at it from different angles, which are marked, then you will discover five different religious symbols, which resemble to the star constellations.

Another one of Tallinn’s mesmerizing landmarks is St. Olaf’s Church. It was built in the 12th century and after several rebuildings, it reached the total height of 123,7 m. The medieval structure might not impress you from the inside, but it gives you an opportunity to climb the tower for 2€ and to enjoy the best viewing platform. The only challenge is to climb the 258 steps of the very narrow spiral staircase. My advice: do it in the beginning of the day, when you still have power and energy. Smokers will probably overthink again if they need to quit.

Nice walk up to Toompea Hill

Toompea is the upper side of Tallinn’s Old Town. In the old days the nobility lived here, nowadays it’s the seat of the Estonian administration with terrific viewpoints and an enormous Russian Orthodox Church, which was built in the period of the time when Estonia was part of the Russian Empire. If you are in love with photography and you permanently crave for likes on Instagram, then Toompea is an utopian place to capture a couple of stunning pictures.

On the other side of Upper Town, just behind the Central station is an old industrial area transformed into an innovative and creative part of the city, Telliskivi. There are plenty of cool shops, interesting restaurants and cafes. The surrounding walls are covered in colorful graffitis, ping pong tables and art installations are scattered throughout the place. This district has everything to please not only hipsters but all kinds of visitors.

Telliskivi is a great non-touristic district, where you can peacefully enjoy your hipster drink or tasty food for “big-smile” prices. It’s a pretty new area, so every time new establishments are surprising their visitors with awesome cafes, bars and restaurants. One of them is F-Hoone, which has been here for a long time offering delightful dishes and entertaining young spirits on the weekends with dance parties. The refurbished industrial warehouse with a minimal, funky décor and unique menu has a magnetic effect on the trendy audience. The food is high quality and you should doubtlessly try the mutton dumplings in creamy mushroom sauce. For beer drinkers I would suggest the real Estonian beer Pohjala. Locals would tell you not to drink Saku, it’s not the best Estonian beer. You can compare it to Heineken, just clever marketing.

Day 2. If You Stay for Weekend in Tallinn, Estonia

Tallinn is a tiny city with a small population but it has numerous attractions and historical sights to offer. Old City Harbour is one of them,it is the biggest passenger harbour in the Baltic region. If you are interested in continuing traveling to further Nordic destination, then you will have a fantastic opportunity to take a cheap ferry to Helsinki, Stockholm or St. Petersburg. You can already get tickets for 6-10€.

You should absolutely visit the exciting maritime museum Lennusadam Seaplane Harbour. The tickets are pricy, for adults 15€, for students 7€, but it’s worth it! The enormous building originally constructed as a hangar for seaplanes in the era of Peter the Great. In the museum you will learn about the history of the boats. The main jewel of the exhibition is the enormous submarine Lembit contracted in 1936. A 30-people-crew used to dive with Lembit during war times. Nowadays you can climb inside of the submarine to inspect how the sailors were living for days or even months in this cramped space. It’s definitely a breathtaking experience!

The museum has also a yellow lovely submarine, which simulates going under the water. Additionally you can use flight simulators, operate miniature ships in a big pool and take pictures in sailing costumes. It doesn’t matter if you are grown up or a child, you will enjoy visiting the Lennusadam museum!

How about to get some delicious Estonian ice cream and to go for walk to beautiful Kadriorg Park. It’s a romantic, majestic and cozy inner-city area with fountains, streams and beautiful flowers and trees. In the 18th century the Russian emperor Peter the Great built a fabulous summer palace for his beloved Catherine the Great, so she can have a rest after her hard-working days. For himself he built one in Petergof, Russia by the way. Nowadays you can visit this architectonical oasis and admire the pompous beauty of the inside.

On the way to the seaside you can observe the splendid memorial “Russalka“, Russian for Mermaid.The statue on the podest depicts an angel. It commemorates the loss of the Russian ship “Russalka”, which sank in the end of the 19th century, all 177 sailors perished.

Must see in Tallinn: Bridgettine Convent

One more of Tallinn’s fascinating historic sites: Bridgettine Convent or better to say the remaining towering gable and walls of the main hall of it. The monastery was built in the 15th century but the forces of Ivan the Terrible ( if you know Russian history ) destroyed the holy building in 1577. Since then we can only observe the beautiful ensemble of ruins, facades and graveyard. Nowadays it’s a museum, that you can visit for 2€ and walk through the tremendous mystical ruins and cellars. It’s a very adventurous experience, who knows maybe you will face a ghost.

Where to eat in Tallinn

Tallinn is a place to see and to fall in love with. It’s unique medieval beauty and its combination of Russian and Nordic culture is admirable. And if you will get hungry on your way from one museum to another, then check Hesburger, the best Nordic Fast Food Chain with delightful burgers! Yum!